The recent visit of Storm Gloria to eastern Spain reminds us of the power of wind and water, so useful when properly harnessed and yet so destructive when disorderly unleashed. Wind and rain are essential to life but, as the saying goes, there is no point having too much of a good thing. In hurricanes and storms, excessive water tends to be more lethal than excessive wind, but both can be very harmful. 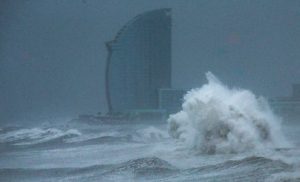 Everything we build needs to take into consideration the loads that it may experience, and this of course includes wind loads. Sustained wind loads grow with the square of the wind velocity, as well as with the size of the exposed area. Apart from that, the wind speed and direction are not constant and, even more complicated, the interaction of the flow with the structure, particularly for flexible structures, can give rise to additional phenomena. A good example of the latter is provided by the well-known movie taken during the final instants of the Tacoma Narrows bridge in 1940.

Perhaps the best-known case was the 200 m crane that went with the wind and fell onto the roof of the Grand Mosque in Mecca in 2015, an accident that we studied for Saudi Binladen Group.

We have also quantified the wind hazard in various contexts and for different applications, in order to determine the wind scenarios that need to be considered in a specific project. There are of course regulations governing this issue, but owners and insurers often have interests that go beyond the mandated regulations. 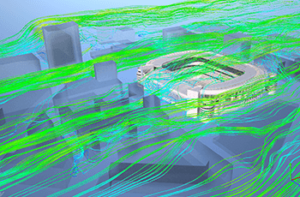 From the viewpoint of the wind as an energy source, Principia has worked in well over 70 projects involving wind turbines. Of those, roughly 75% concerned new designs for towers or foundations, various ground conditions, seismic effects, performance of mechanical parts, etc.

Regrettably, the other 25% dealt with problems experienced at existing installations, many of which arise from the use of incorrect design assumptions regarding the transmission of the wind-generated forces from the tower to its foundation.

And a typical problem that oscillating loads and responses are prone to generate is material fatigue. As a consequence, we have had to analyse fatigue problems and cracking in many mechanical parts of wind turbines, including the rack supporting the main equipment in the nacelle.

In all these tasks, computer simulation, when based on the correct physical phenomena and assumptions, is the key for achieving sound designs, as well as for investigating and remediating those that were gone with the wind or are threatening to do so.

Structural simulation plays an essential role in the configuration of spent nuclear fuel storage pools, and its treatment and disposal.