If you are a cycling fan, you must have thrilled to Alberto Contador’s victory at the impossible Angliru and admired the performance of Chris Froome in the last time trial. Two riders, physically very different, in two different disciplines from the same sport, climbing and time trial, weight versus aerodynamics. 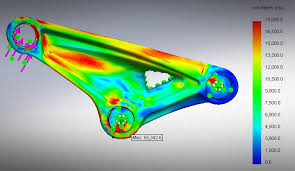 What is the common element? The bicycle. But we all know that, apart from the brand, mountain and time-trial bicycles have very different shapes, weights and sizes, according to their function, and that Contador’s bicycle differed greatly from Froome’s.

Bicycle frames used to be made of welded tubes of steel and, later, aluminium. The frame’s purpose was to provide strength, whether climbing a col or pedalling on level ground. With the passage of time, competition required the improvement of frames’ performance, making them lighter without losing strength, adapting them both to the role for which they would be used and to the cyclist who would use them. Continuous technical developments eventually led to the introduction of composite frame materials.

Major frame manufacturers are continuously innovating to produce lighter and more streamlined designs, using complex structures that optimise performance. The frame of a high-performance road bicycle incorporates up to 180 individual carbon laminates of various thicknesses to provide the necessary local strengths, while a downhill bicycle, more exposed to wear, bumps and sudden turns, may use up to 238 laminates of various thicknesses and orientations.

Virtual simulation tools exponentially increase the number of models and composite materials that can be tried, optimizing the decision making process and the quality of the final product.

Each part is unique depending on its function. For example, the bottom bracket undergoes significant torsion and bending, due to steering and the way in which the bicycle is ridden. Thus its specific strength and stiffness requirements are very high compared with other parts of the frame.

In frame manufacture, it is not enough to be able to deal with progressively more complex designs, it is also necessary to simulate the behaviour of each and every part, so as to adopt the best configuration in each case and to advance to prototype testing only when designs have successfully completed the virtual analysis and verification phases.

Efficiently managing the design of composite materials with complex surfaces is only possible with design programs such as CATIA, which allow simulated testing of different laminate configurations and the generation of finite-element models that can be rapidly evaluated using SIMULIA’s analysis tools.

This reduces the time and cost involved and also allows the testing of many more alternatives, minimising the number of prototypes and decreasing both energy requirements and waste.

With virtual simulation tools, the selection of the best alternative for a frame may be completed within days rather than weeks, while exponentially increasing the number of models and composite materials that can be tried, optimizing the decision-making process and the quality of the final product.

Next time we see Froome pedalling, we will also think of his bicycle and the designer’s contribution.