We would like electricity generation to be sustainable, clean, safe, reliable, and inexpensive. We do not want to consume the limited resources of fossil fuels. We do not want to discharge greenhouse gases to the atmosphere, leave hazardous wastes, much less endanger anyone’s life. We want power to be available whenever we need it and, of course, we would not want to pay an arm and a leg for it.

The inescapable conclusion is that we need to store energy for load balancing. On the one hand, thermal electricity generation, as in coal-fired or nuclear plants, has no flexibility to adjust to the daily evolution of demand. On the other, renewable energy sources, such as the wind or the sun, are naturally intermittent. And there are very few options for storing energy at an industrial scale while satisfying the above conditions. 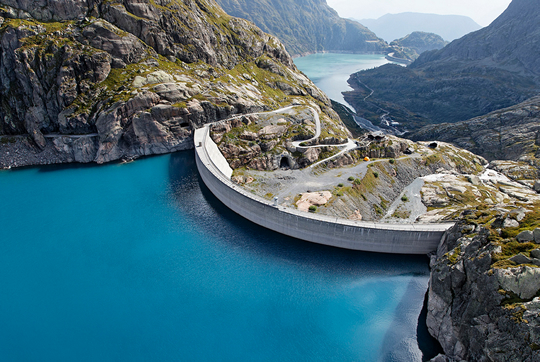 The pumped storage method consists in storing energy in the form of gravitational potential energy of water, pumped from a reservoir at a lower elevation to another at a higher one. To run the pumps, low-cost surplus off-peak electric power is typically used, although other energy sources, such as wind, can be employed. During periods of high electrical demand, the stored water is released through turbines to produce electric power.

The round-trip energy efficiency of pumped storage is on the order of 70%–80%. Although the losses of the pumping process make the plant a net energy consumer overall, the system increases revenue by selling electricity during periods of peak demand, when prices are higher. Thus, energy from intermittent sources and excess electricity from continuous base-load sources is saved for periods of higher demand.

Pumped storage is the largest-capacity form of grid energy storage available and, as of 2017, it accounted for over 95% of all active storage installations worldwide, with an installed nameplate capacity of over 184 GW.

The siting of those installations is made difficult by the requirements of water availability and having to place reservoirs at two considerably different elevations; the process tends to be further complicated by environmental concerns, which are not uncommon at sites that combine the two previous characteristics. 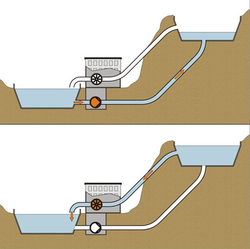 Simulation cannot provide water where there is none, nor differences in elevation at a flat site. But it is invaluable for almost everything else in relation with a pumped storage facility. This starts from the structural problems posed by the dams and other civil works like the galleries connecting the two reservoirs; static and dynamic conditions, such as the dam-water-terrain dynamic interaction during earthquakes, must be considered.

Principia has gathered considerable experience in solving those problems at a number of installations. And it is likely to gather much more in the future, as the trends in electricity generation will certainly increase the need for energy storage and there are very few alternatives to pumped storage.