The application of horizontal dynamic loads to liquid storage tanks gives rise to both impulsive and convective effects in the stored liquid. The latter entail oscillations of the free surface of the liquid, which are known as sloshing.

The video shows results obtained with Abaqus CEL when modelling this phenomenon.

The dynamic effects of wind action on structures with large dimensions may be sufficiently important that the static approximations become clearly inapplicable. For large structures, the use of gust factors may be too crude as a methodology; instead, spectral methods are required, which provide a better description of the random characteristics of the wind.

Principia has applied these methods in bridges of various types. The example shown here corresponds to a concrete viaduct, with long spans and very high piers; its response under wind loading was studied both in the service conditions and in various construction phases.

The figure shows some of the vibration modes of the viaduct. 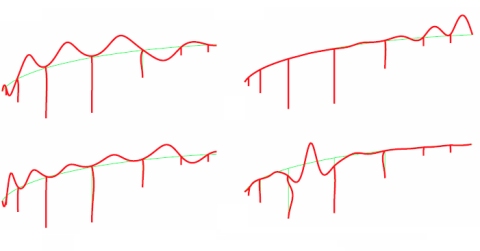 Analyses were conducted to study the seismic response of the new locks of the enlarged Panamá Canal.

Apart from the deformability of the steel locks, the studies took account of their interaction with the various water masses, the compressibility of the water, the radiation of energy through the ground, and other complex phenomena.

The amplified distortions of one of the locks can be seen in the figure. 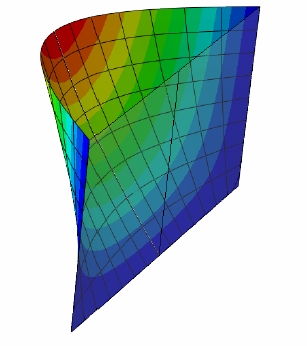 Principia simulated the effects caused by the sudden depressurisation of a distributor in the course of pressure tests carried out at a hydroelectric plant. The reverse water hammer produces cavitation, water column separation, and subsequent implosions.

The calculations, which must account for the interaction of the structure with the contained liquid and vapour, were carried out in the absence of information about the outcome of the accident, but turned out to reproduce very precisely the observations.

Design of a “morning glory” spillway

A number of different design configurations were analysed for one of the largest “morning glory” spillways in the world, specifically for the Calanda reservoir in the Guadalope river.

The simulations conducted allowed arriving at configurations that avoided cavitation problems while satisfying the rest of the design requirements imposed. The figure shows trajectories, colour-coded with the local velocities. 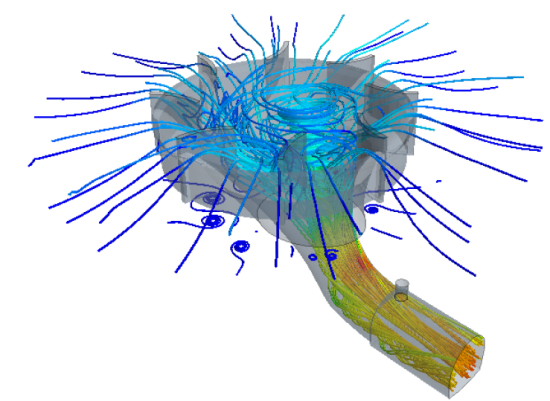 Electricity generation, as well as a number of other industrial processes, frequently need to shed heat, which is frequently achieved by cooling with waters that are eventually discharged into the sea, rivers or reservoirs. Some processes, like desalination, produce water with a composition that differs substantially from that of the receiving body of water. And others, like the regasification of natural gas, generate effluents that are cooler than the receiving waters. All those situations require studying the dispersion and mixing of the effluent with the receiving waters in order to evaluate the impact on the environment.

Principia has carried out studies in all the contexts listed. The calculations are usually parametric in order to account for the intrinsically variable nature of many of the parameters like the meteorologic and oceanographic ones.

The example shown combines calculated temperatures with those measured from a boat.The other figure displays surface temperatures obtained by aerial infrared photography. The effluent corresponds to the cooling waters from a nuclear power plant.

Recovery of fuel from the Prestige tanker

The Prestige tanker foundered in November 2002 some 130 miles from the Galician coast. Repsol accepted the government’s request to solve the problem posed by the fuel still stored in the wreck at a depth of nearly 4 km.

Principia collaborated with Repsol with many types of calculations in support of their activities. Those included the structural evolution of the ship while sinking and impacting the sea bottom, the simulation of the fuel behaviour in the various alternatives for extraction and transfer to the surface, and a series of other physical problems associated with the fuel recovery.

The first picture shows the tanker shortly before foundering. The other presents the bow portion of the ship in a picture obtained by sonar scanning. 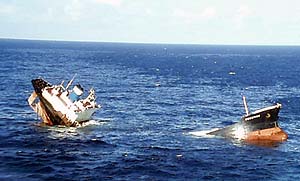 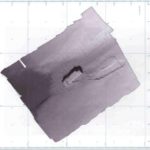 Alterations of the freatic surface

The construction of underground works very often affects the subsurface flows and the freatic surface in the ground due to the barriers introduced by the construction. Particularly in urban areas, such effects must be limited to prevent flooding of basements, differential settlements, cracking problems, etc. The construction of new metro lines and the burial of existing railway tracks are typical originators of these problems.

Principia has carried out this type of studies for new metro lines in cities like Valencia or Sevilla; in relation with the burial of railway lines in Logroño, Oliva, etc; and for other urban tunnels like the one under Plaza de Colón in Barcelona.

The following figures present an example. The first one shows the changes predicted in the freatic surface in a certain case in the absence of any remedial measures; the second one is similar, but now incorporating some measures to mitigate the barrier effect that the construction would impose on the subsurface flow. 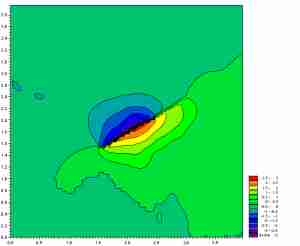 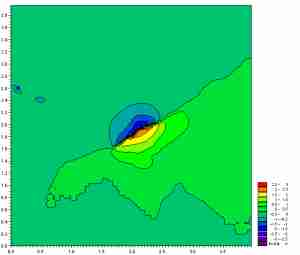