When driving along a motorway, you will have noticed that the pavement normally has joints at least at the beginning and the end of every bridge and, unless the bridge is very short, also several times in between. The reason is that, with seasonal temperature changes, the deck lengthens and shortens; if such elongations were impeded, the bridge deck, piers and abutments would have to cope with the corresponding stresses. 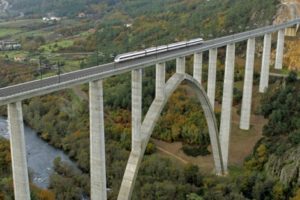 The same used to happen with trains. The standard rail length in Spain was 18 m and most of us had a mathematically minded father or uncle who told us that, since 18×60 is 1080, the number of times per minute you heard the wheels going across rail joints gave you roughly the train speed in km/h; you could even add an extra 8% if you felt like splitting hairs.

Most rail lines have now lost those periodic gaps in favour of a continuous, welded track, thereby foregoing the reminiscent rhythmic sounds of the speeding trains of the past. The rails are now capable of sustaining the longitudinal stresses associated with thermal changes, while appropriate devices restrict their lateral movement to keep them from buckling in summer.

An integral bridge lacks structural discontinuities, such as expansion joints and sliding supports; thus, the thermal expansions and contractions of the deck affect the abutments and piers, while such effects are minimised in a conventional bridge.

On the other hand, an integral design offers the advantages of structural monolithism. All piers and abutments can collaborate towards a distributed transmission of the horizontal loads to the ground; also, the redundancy of the structure produces a more desirable global response and contributes ductility to the potential failure modes 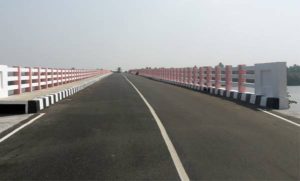 The ability to transmit large horizontal forces to the ground in an orderly manner is particularly significant in railway bridges, which must be designed to withstand considerable loads from the emergency braking of trains, as well as those arising from seismic action. Apart from those advantages, the absence of joints and bearings makes construction easier and faster, and also results in maintenance savings.

Jointless highway bridges are relatively common in many parts of the world, with the United States accounting for at least 13 000 of them, the longest spanning 358 m. In Spain the length of integral highway bridges is not specifically limited, but the horizontal displacements of the deck cannot exceed 30 mm, which in practice limits the length to about 100 m, even before accounting for shrinkage and creep. And there are also other limitations, like 60° on skew and a radius of curvature that must exceed 10 times the deck width.

Principia has used realistic simulations with Abaqus to participate in research and design activities in relation with integral bridges, particularly for high-speed rail applications. Integral bridges are becoming increasingly popular in Europe and it would not be surprising if this trend were to continue, in spite of the relative scarcity of national criteria and the at-times conflicting character of the existing guidelines.