Water is inherently soft, after all it is normally a liquid; not only that, it tends to soften many of the materials it touches. But don’t let that fool you, in some conditions its power is truly fearsome.

There are many instances in which its dynamic power is clearly felt, as in floods, ocean waves and tsunamis. Others are less dramatic, like the silent pressure exerted at large water depths. Today I would like to recall a specific one, the water hammer. 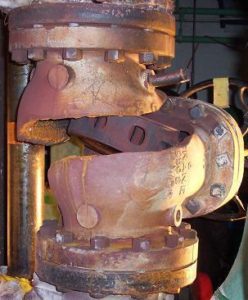 The conservation of momentum implies that any change in the velocity of water is associated with a change in its pressure. For moderate changes, the so-called Venturi effect has a wealth of applications, from carburettors, to cleaning equipment, vacuum systems, or flowrate gauges.

But if the change in velocity takes place very rapidly, as in the sudden closure of a valve, the pressures generated are very high, giving rise to what is known as a water hammer.

In the first century BC, Vitruvius already described the effect in lead pipes of the Roman public water supply. Also around that time, the Romans started mining gold at Las Médulas in León (Spain), where they used the destructive power of the water hammer to demolish mountains, looking for the gold afterwards among the debris. And it is surprising that the first modern treatment of the phenomenon is not due to civil engineers, but to a 19th German physiologist investigating the pulse in blood vessels.

Negative water hammers also exist. Hydraulic systems are tested above their operating pressure. If the closure plug fails during the pressure test, water will start being ejected at a velocity in m/s roughly equal to the pre-existing pressure in MPa. Also, the information will start travelling in the system at about 1 km/s and, when it reaches an end with fixed boundary conditions, the pressure change will try to double. Cavitation will then be produced and, since water vapour changes volume far more easily than the liquid, separate liquid columns will start travelling in the system with different velocities.

When those water columns meet again, in a frenzy of collapsing vapour bubbles, there will be a new change in velocity, with associated pressure changes potentially even larger than those initially triggering the event. Of course, this is a highly demanding situation, since neither the hydraulic system nor its supports are in principle designed for dealing with those extreme transients..

Principia has experience in modelling such events. It is not easy, as the fluid problem is coupled with the structural one: indeed, the only reason why the results are not infinite is that the piping is deformable and the water compressible, both effects being small but of the same order of magnitude. And it is further complicated because the water experiences successive phase changes, from liquid to vapour and back again to liquid.

In summary, a technically very challenging problem, that only sophisticated simulation can hope to resolve; we used Abaqus, now integrated in the collaborative platform 3DEXPERIENCE. And we are proud to have dealt with it successfully and to have verified that nature confirmed our predictions.

We certainly cannot do everything. But we can do many things, including some very difficult ones.