In the course of an R&D project financed by the Spanish Ministry of Public Works, Principia studied, together with Esteyco and the Polytechnical University of Catalunya, the behaviour of integral bridges for high-speed railway lines.

Apart from the study of the response to static loads, such as caused by concrete shrinkage and seasonal thermal cycles, the research concentrated on the behaviour under dynamic demands, such as seismic, accident and braking loads. 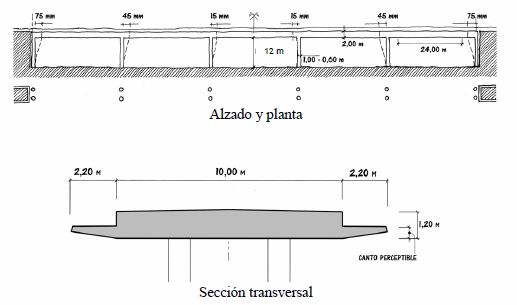 The seismic analysis of dams needs to take account of the interactions of the dam, the water in the reservoir, and the ground. The accident experienced at the Fukushima nuclear plant triggered the performance additional calculations concerning the seismic vulnerability of dams upstream from nuclear power plants.

In this context Principia analysed the Mequinenza and Riba-Roja dams, both of them located on the river Ebro and upstream from the Ascó nuclear plant. 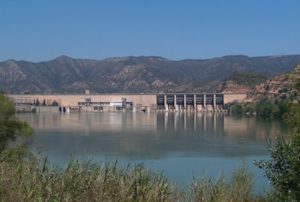 Bridges normally have to face a number of dynamic loads, which include those generated by traffic, wind, earthquakes, ship impact, etc. Principia has analysed this type of loads for a large number of structures, among them the Oresund Link between Denmark and Sweden, the bridge coonecting Rumania and Bulgaria across the Danube, the new Tagus bridge in Lisbon, the Alameda bridge in Sevilla, the fourth Panama bridge over the Canal, and many others.

In some cases less conventional loads have to be analysed. For example, Principia has studied problems of aeroelastic coupling in some bridges, and the effects of explosions, both in air and in water, in other bridges. 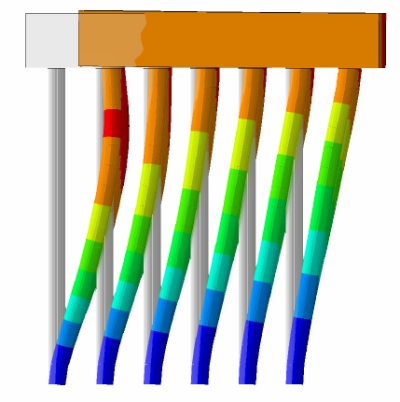 Principia has carried out more than 50 projects involving wind turbines in many locations of the world. Perhaps worthy of special note are the dynamic studies, both because of with wind generated loads and because of earthquakes. 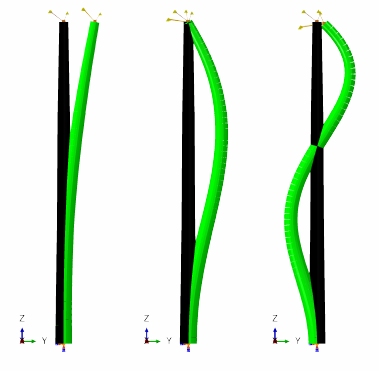 Principia has ample experience in the design of storage tanks for liquefied natural gas (LNG), having conducted the seismic studies for more than 50 tanks worldwide and having been responsible for the overall design of more than 50. For the design activities Principia enlisted the collaboration of firms such as Esteyco or Carlos Fernández Casado.

The calculations required include the dynamic analysis of the tank under the various design seismic motions (OBE, SSE and ALE), taking into account the requirements associated to each one of them: strength, stability, integrity, containment, freeboard, etc.

The tank shown is one the tanks inDahej (India), with a capacity of 150.000 m³ and supported on 578 piles, in an advanced state of construction. The other figure presents one of the numerical models used for simulating the dynamic response of the tank. 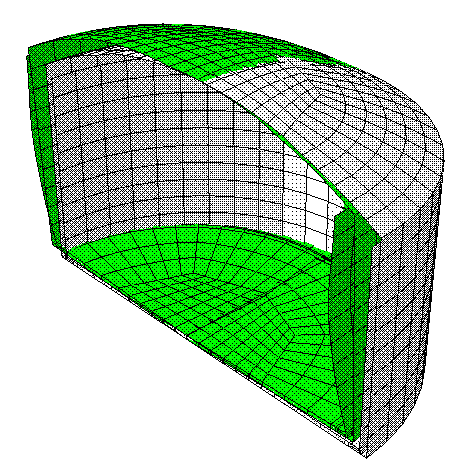 New techniques and materials allow for progressively longer spans of bridges and pedestrian walkways. Slender designs may lead to low natural frequencies, close to the walking frequency of pedestrians. This may cause pedestrians to synchronise their step with the movements of the structure and hence to a resonant response with excessive motions. London’s Millenium Bridge became the best known example of this problem.

Principia has studied the vibrations and dynamic amplification effects in support of the design of several pedestrian walkways. One of them is the Pedro Arrupebridge in Bilbao, with a span of 150 m. Finite element analyses were performed to determine the natural modes and frequencies, as well as the dynamic amplification of the excitation produced by pedestrians. The work included the design of four tuned mass dampers (TMDs) to limit the vibration levels expected.

The figures show the constructed bridge and the animated modes of vibration.

The wind can also be the origin of vibration problems in structures. Among the structures sensitive to these problems are cantilevered roofs of large dimensions. The effects can worsen if the structural frequencies are low and located in the high energy range of the wind spectrum.

In support of the structural project by Esteyco and the architectural design of Jean Nouvel, Principia carried out the dynamic characterisation of the enlarged Reina Sofía Museum in Madrid, which included the determination of the natural modes and frequencies of the new roof.

A virtual image of the new roof is shown, together with the finite element model used in the dynamic evaluations. 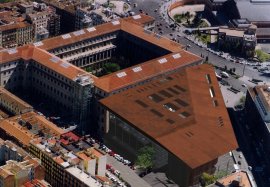