When a bridge is going to be built over water, there is the possibility of bringing successive deck segments by barge and lifting them into position. The process is conceptually simple but, particularly in open waters, as in a bay or estuary, the dynamics of the operation may be rather complex..

Principia analysed this process for two well-known, recently erected bridges: one is the “Constitución de 1812” across the Bay of Cádiz and the other is the Queensferry Crossing in Scotland.

Some of the experience gained, particularly in relation with the latter, is briefly commented here. 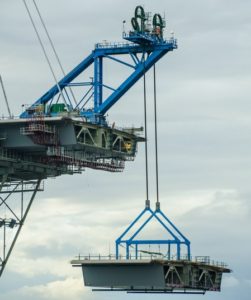 As mentioned, the deck segments are brought by barge and lifted by an erection traveller. During lifting, the barge is moored with four lines, but both the barge and the bridge are undergoing motions induced by sea currents and waves and by wind action. A successful outcome requires limiting the misalignment of supports, the plinth loads, the uplift loads in the erection traveller, the dynamic load factor, the strand bundle loads, those in the restraints, and in the strands.

To investigate the process, we generated a model that included the barge and its mooring system, the supporting plinths, the bridge segment, the lateral restraints, the lifting strands, the erection traveller, and the bridge deck.

We conducted some 400 simulations, covering multiple combinations of wave, wind, and current forces, as well as other aspects like the deck length and the cracked or uncracked state of the deck section. The analyses allowed establishing whether the specified success criteria were being satisfied, investigating the influence of the various parameters, and pinpointing the potentially more hazardous phases of the lifting process.

The barge and its mooring system were represented with the corresponding mass and stiffness matrices. The transported segment was modelled with its mass and rotational moments of inertia. Truss elements were used for the lateral restraint system. Connector elements were used to model the plinths, with their compressional stiffness and damping.

The restraint cables have one end attached to the barge and the other to the segment being carried. The lifting strands were modelled with connector elements that allow lifting the segment by pulling up the strand; they were attached to the erection traveller, represented with a connector element with its own stiffness. The erection traveller was also connected to the bridge deck, characterized with its stiffness, inertia, and damping, in both translation and rotation. 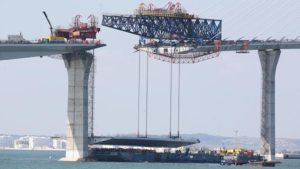 After extracting the natural modes, the lifting process was studied. For this, the histories of the barge and bridge deck motions, as caused by waves and winds, were converted into histories of forces. Those force histories, together with those from the other components of the motions, were introduced in the model and the time varying solution was obtained by implicit integration using Abaqus.

The numerical approach adopted was very successful and it allowed confirming that practically all acceptance criteria were satisfied for all the combinations of parameters studied.

The wind was seen to play a relatively unimportant compared with the waves. The more critical phase was that in which the segment is about to lose, or has just lost, contact with the barge, a phase that should be kept as brief as reasonably possible. Finally, reality is the best check for any calculation: the lifting process operated without problems in both bridges and both are now in operation.

In the process of designing a new container the best option is to make use of numerical simulation by finite elements (FEA), combined if necessary with computational fluid dynamics (CFD).