Everybody is aware of the security checks that one must go through before boarding a plane. But you may have thought that, as a clever terrorist, you could simply leave the explosives in a car in front of the glazed terminal, go away and detonate them. Well, it is not that easy. Though not always as obvious, security also extends outside the terminal building and, in spite of the famous fragility of glass, the glazing envelope of modern terminals is designed taking that threat into account.

In the present world, the threat of terrorist explosions is increasingly one to be considered when designing the façades of many buildings. Simply dealing with airports, it is worth recalling the relatively recent incidents experienced at Istanbul Atatürk and Brussels airports in 2016, Moscow Domodedovo airport in 2011, or Madrid airport in 2006. 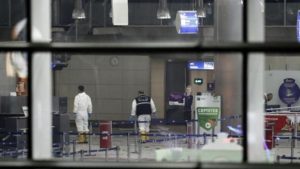 The requirements imposed by potential terrorist explosions must often be reconciled with architectural designs that are pursuing transparency, for both physical and image purposes, and that hence contemplate extensive glazing enveloping the building. Should a blast defeat the glazing, glass shards could become murderous projectiles inside the building.

The threat is not entirely new and the approach to deal with it has traditionally been based purely on physical tests. Various configurations of laminates consisting of different glasses would be subjected to the effects of a series of blasts encompassing different yields and ranges. Of course, the process is lengthy, expensive, and not entirely satisfactory, as the effects that arise from the different responses of the glazing and the supporting structure cannot be properly included.

Modern blast-resistance glazing is made of laminated glass, consisting of a number of tempered glass sheets with a polyvinyl butyral (PVB) layer in-between. The role of the PVB is both to hold the glass fragments together and to contribute a ductile resistance to the glazing when the glass has already fractured.

This deformability also shaves the peak of the blast overpressure and reduces the size of the instantaneous loads transmitted to the supporting frame, which is composed of vertical mullions and horizontal transoms. The attachment of the laminated glass to the supporting frame is achieved by means of a structural silicone sealant.

Rather than physical testing, numerical simulation by finite elements now provides a proven alternative for the design of blast-resistant glazing. This includes the details of the blast wave propagation through air and the time evolution of the very dissimilar responses of all the materials involved in the glazing, as well as its attachment to the supporting frame and the main structure of the building.

Principia has gathered a considerable experience in the analysis of blast effects in many glazed buildings, such as airport terminals, various corporate headquarters, offices of international bodies and the like.

Thanks to simulation, you can feel safer next time you wander what would happen if a nut-head detonated a bomb just outside the beautifully glazed building where you happen to be.