Impact of the Prestige tanker against the sea bottom

Principia collaborated with Repsol in relation with many of the problems posed by the accident suffered by the Prestige tanker. One of them consisted in analysing the process of sinking and the subsequent impact of the bow portion of the ship against the sea bottom, so as to determine its stability during the planned recovery of the fuel still stored in its tanks.

The figures show how the problem was meshed and a video of the impact of the ship against the soft sediments of the sea bottom. The calculations took account of the deformability of the hull and its internal structure, the presence of the internal and external liquids, and the behaviour of the sea bottom.

Analyses were carried out to determine the vulnerability to terrorist explosions of the King Fahd Causeway, the 25 km maritime link that connects Saudi Arabia and Bahrein.

Similarly Principia analysed the vulnerability to blast of the current corporate headquarters of BBVA in the AZCA tower in Madrid, as well as that of their future headquarters, designed by Herzog de Meuron, in Las Tablas.

Another similar study was conducted to establish the vulnerability to terrorist explosions of the United Nations communications centre in Quart de Poblet (Valencia).

Principia simulated a series of postulated explosions in an offshore platform of the South Pars Field (Iran) in order to determine the overpressures generated at each location of the facility.

The objective pursued was to verify the blast isolation between the various modules of the platform as well as the vulnerability of the equipment under the postulated explosions. 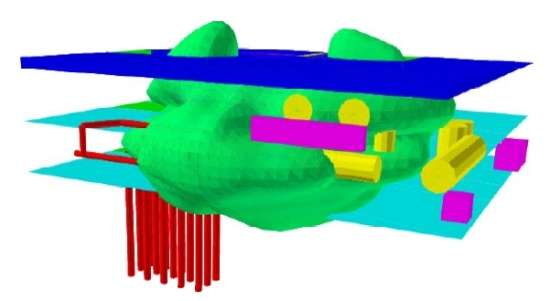 Principia conducted numerical simulations and comparisons with actual test results in support of the design of vehicle containment barriers for highways, which have to satisfy the applicable European standards.

It must be verified that the vehicles do not go across the barrier, that they return to the road with shallow rebound angles, and that the accelerations felt by the occupants are limited.

As part of the International Benchmark IRIS_2012, Principia simulated impacts of soft and rigid projectiles on reinforced concrete slabs, including in some cases the total perforation of the concrete slab by the impacting missile.

The calculations conducted by Principia predicted accurately the outcome of the physical tests in respect of crushing and cracking of the concrete, yielding and failure of reinforcing bars, and energy spent by the missile in the perforation process.

Among the many impacts on aircraft analysed, Principia participated in Project CRAHVI (CRAshworthiness for High Velocity Impact) in the context of the V Framework Programme of the European Community. The objectives were the development and validation of numerical tools for reducing analysis costs and duration, together with the evaluation of new materials, all in relation with the problems caused by impacts on aircraft by birds and other foreign objects.

Principia’s participation involved first the development and calibration of bird models suitable for representing reliably their dynamic behaviour in the course of such events. Subsequently Principia analysed impacts by various objects on the horizontal stabiliser of the Airbus 350 aircraft. 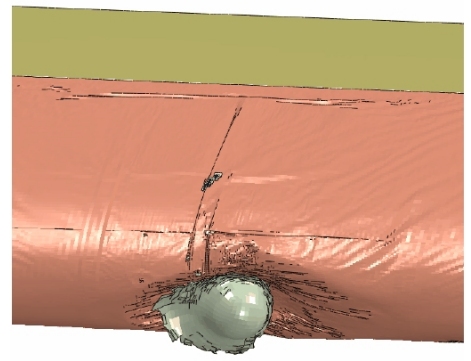 The design of the racks for the spent fuel pool in a nuclear power plant must take into account many demands, both operational and accidental. The latter include the effects of drops of fuel elements and other equipment onto the rack. Principia has analysed such impacts for various nuclear plants in France, United States, Spain, Taiwan, Korea, Finland, etc.

In the course of those postulated drops, the rack must prevent damage to fuel elements other than that being dropped; also, the deformations produced should be limited to avoid possible criticality problems.

The figures show the deformations, large but acceptable, induced by one of those events in the cells of a rack. The first shows the effects of an impact at a corner between four neighbouring cells, while the other corresponds to an impact on the wall separating two adjacent cells.

Principia has carried out all the structural calculations required for licensing several flasks for storage and/or transport of irradiated nuclear fuel,including the effects of normal, abnormal, and accidental loads.

The DPT flask and, more recently, the ENUN 32P flask, are among those analysed by Principia. Also included are other packages for storage and transport of nuclear waste and other radioactive sources from industry, hospitals and research institutions.