We already dedicated a post to wind energy in general, and to our participation in that industry. From that post it may be worth recalling that all living species need energy to survive, and humans more than most. Our basic energy source is the sun; the wind is one of its effects, that we harness for propelling a sailboat, or for operating classical windmills and modern wind turbines.

A wind turbine is nothing but a fan working backwards: instead of supplying energy to an electric motor to move the fan blades and displace air, we use the wind to move the fan blades that drive an electric generator. Ideally, we would like to locate our turbines where the wind is strong and consistent, something that is more frequently available offshore; on the other hand, construction and maintenance costs are obviously smaller onshore.

In shallow water depths, say up to some 60 m, offshore wind turbines are invariably founded in the sea bottom, but in deeper waters this is no longer practicable, and a floating support structure is required. According to The Economist, over the last four years the capacity of offshore wind farms with turbines founded in the seabed has nearly doubled, from 19 GW to 35 GW, and amortised costs have reduced by a third, from $120 to $80 per MWh. 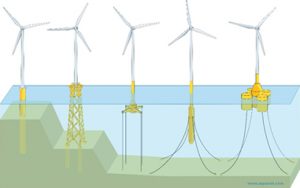 But 80% of the resources are located in waters exceeding 60 m, which highlights the potential rewards of having reliable floating supports for the turbines. Although there are still no concepts that can be considered beyond the prototype stage, considerable efforts are being dedicated to this issue in America, Europe, and the Far East. The problem is not easy when you consider the floating stability of a top-heavy tower, subjected to rough seas and strong winds. And there are other complications, associated to the maintenance of those moving facilities from an also moving vessel; and the fact that economies of scale are tending to make the towers taller and the turbines bigger only increases the challenges.

There are primarily four concepts currently being considered for the support structure, all of them moored to the sea bottom. Perhaps the most common one is a semisubmersible structure with active damping achieved by water pumping. A second possibility is a spar structure, heavily ballasted at the bottom to maintain its upright position. A third one is a tension-leg platform, where the tension of cables fixed to the sea bottom compensates the buoyancy of the structure. The fourth one is a square barge shape, where water sloshing with the barge frame dampens its movement.

Principia is highly experienced in wind energy, having worked in over 70 projects involving wind turbines since the mid 90’s. Most of those were for onshore wind farms, but the activity is increasing for offshore wind farms; this includes floating structures, indeed we have already been involved in studies dealing with several of the concepts mentioned above.

Once again, simulation, using the correct physics, is key to sound designs, as well as the tool to investigate and remediate those that nature proved to be defective.