Forensic engineering is the investigation of failures, ranging from serviceability to catastrophic, which may lead to legal activity, including both civil and criminal. The most recent example is the collapse of the Morandi bridge in Genoa, which caused a great number of victims.

It covers the investigation of materials, products, structures or components that fail or do not operate as intended, causing personal injury, damage to property or economic loss. Generally, the purpose of the investigation is to identify the causes of failure with a view to improve performance, to guide in recovering from it, or to assist a court in determining the facts.

It is a fascinating activity. One is inevitably provided with incomplete information, as investigations are always more thorough after an accident than before, and one must play Sherlock Holmes using the available information and the laws of physics. The conclusions reached must be consistent with all the information at hand, a single contradictory result suffices to invalidate a tentative explanation. Obviously, the more information is available, the less likely that more than one alternative explanation will exist.

Failures seldom have a single cause. An in-built conservatism is intended in all projects, hence a single error usually has to be very gross to trigger an accident. More likely, a series of unfortunate circumstances combine, leading to the final accident; the role of each one of them, as well as their interactions, have to be ascertained.

And there is always a large number of “what if” questions to consider, where one examines the effect of actions that could have taken place in the past, but actually did not; or the possible impacts of alternative remedial measures for the future.

Principia has worked along those lines in a large variety of incidents. Some are very well known to the general public, such as the failure of the Aznalcóllar tailings pond in 1998, the collapse of a 50-m road sign onto the A-6 motorway by impact from a lorry in 1999, the floundering in 2002 of the Prestige tanker and the subsequent efforts to recover the oil remaining in the wreck or, more recently, the failure of a large crawler crane onto the roof of the Grand Mosque in Mecca in 2015.

Other cases may not have hit the headlines, but many are just as interesting. We have studied excess vibrations at the largest thermal solar plant in the world, conventional thermal plants, pumps moving liquefied natural gas, piping systems, bridges, stadiums, etc. We have analysed the collapse of various storage tanks in different parts of the world.

We have investigated cracks, failures and even fires at a considerable number of wind turbines. We have also studied the catastrophic failure of a glass furnace, which is a rather expensive facility that operates at about 1.500 ºC. And we were called to investigate collapses of racking systems at a number of logistics centres. 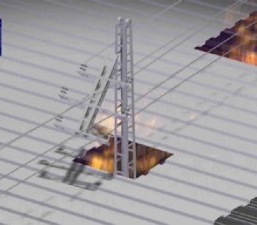 Perhaps a particularly interesting case was that of a facility that had experienced both a fire and the collapse of a pylon supporting a high-voltage electricity line. Obviously, there had to be a relation between both, the question was which event was cause and which was effect. The brittle failure experienced by the ductile steel of the pylon gave the clue: a pre-existing fire had caused melting of the galvanisation, leading to liquid-metal embrittlement.

As said earlier, it is a fascinating activity. Admittedly, it may go through some frustrating moments while one is still walking in the dark, but turns exceedingly rewarding once the physical truth brightly shines.