Effects of fire in an adjacent tank

One of the design hypotheses imposed on storage tanks for liquefied natural gas is that of a fire in an adjacent tank, which causes the application of large thermal fluxes for considerable periods of time. The tank must retain its containment function during and after the process.

Principia has analysed this problem for the several tens of tanks in which the company has taken global responsibility for the civil design of the outer tank.

The figure presents the isothermal lines in the upper region of the wall and beginning of the dome at some point after the onset of fire. 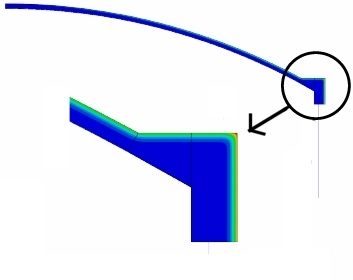 Chemical expansion of concrete in dams

Varios chemical processes, especially the alkali-silica reaction, may cause long term swelling of concrete, a phenomenon experienced in many old dams in Spain and abroad.

Principia has analysed the problem for half a dozen dams and has also participated in an international benchmarks to predict the evolution of the Kariba dam on the Zambeze river, which hosts the largest reservoir in the world and suffers from swelling problems.

The photograph shows the Belesar dam, one of those analysed by Principia with a high level of detail because of its concrete swelling phenomena. 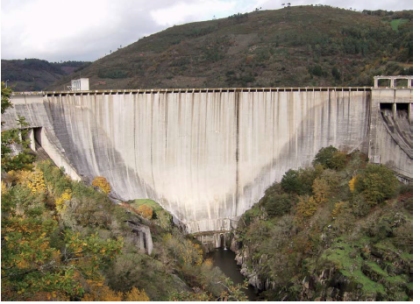 Concrete curing in a dam

Concrete curing, in which the material gradually develops its strength and stiffness, is an exothermic process. The heat generated dissipates quickly in thin structures, but its diffusion is slow if the structural dimensions are large in all directions. Concrete dams are typical examples of structures that are sensitive to this problem. The temperature increase causes thermal dilation of the core region, which may lead to cracking in the outer regions of the dam, where temperatures remain lower.

This type of phenomena must be taken into account at the time of deciding the horizontal dimensions and thickness of concrete placement, as well as for determining the sequence of pouring. Principia has experience in conducting the necessary thermal and mechanical calculations required to deal satisfactorily with this problem.

The figures show the finite element mesh used in the analyses conducted for a gravity dam and the distribution of principal stresses at a given time during the construction. 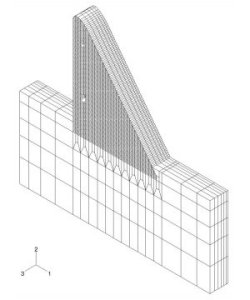 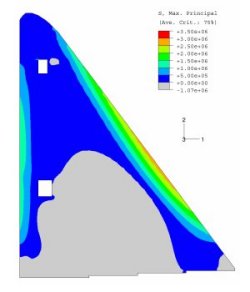 Fire effects in a concrete girder

Fires inevitably result in temperature increases in the structures affected. Thermal dilation may then generate primary demands on the structure, as well as giving rise to second order effects; furthermore, heating results in a degradation of the mechanical properties of the materials. The combined action of these effects could eventually trigger the collapse of the structure. The failure of the Twin Towers in New York on 9/11 is an example of this collapse mechanism.

Studies of fire vulnerability allow determining for how long a structure may be expected to retain its integrity while subjected to the action of fire. Principia has analysed the thermal transients expected from postulated fires in various types of structures, tracking the time evolution of the demands and the progressive weakening of the structure.

By way of example, the figures show some results generated in the analyses carried out for a girder in a singular structure. They include the temperature effects on the properties, the temperature evolution in the girder and the associated bending moments. 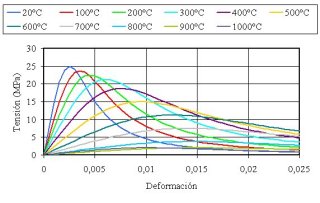 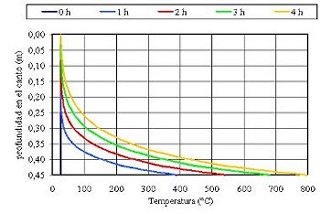 One of the postulated accidents when designing full-containment tanks for liquefied natural gas is the major leak, in which the stored liquid is assumed to fill the annular space between the cryogenic steel inner tank and the prestressed concrete outer containment. As a consequence, the inner surface of the concrete is cooled down to 160ºC below zero. This accident is superimposed to a number of other loads, at times even including some seismic events (the OBE earthquake). The tank must retain its structural integrity and its containment function.

The required thermal-mechanical analyses are strongly non-linear and must be able to incorporate concrete cracking extending through most of the wall thickness. Principia has carried out these analyses for about ten different tanks.

The figure shows typical temperature distributions generated in the course of this accident. As can be seen, the lower region of the wall is protected from cooling during the spill by the thermal corner protection provided in that area. 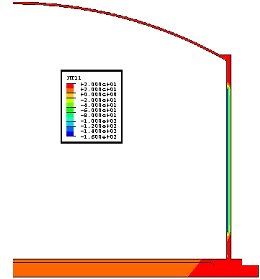